You are here: Home / Blog / Experts / Fundamental analysis for experts

Posted in: Fundamental analysis for experts

On saturday, May 2, 2015, there was an annual shareholders meeting of the company Berkshire Hathaway. The annual meetings of Berkshire Hathaway are always special. Thousands of thousands shareholders, analysts, reporters from all over the world  come each year to Omaha to see and hear the speaking of  Warren Buffet and Charlie Munger. They are all eager to know what Warren and Charlie has to say about the company Berkshire Hathaway, their view on the stock market and their view on the economy. In this article we at 101trading.co.uk will highlight a few things from that annual meeting that we think is important and answer the question if Berkshire Hathaway is still a good company to invest in. 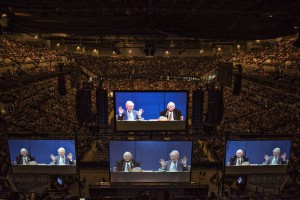 Foto taken during the Shareholder meeting with 40.000 shareholders

Berkshire Hathaway in the present and how will it look like in the future?

Clayton Homes is just one of the companies that Berkshire Hathaway own in their portfolio. Warren Buffet and Charlie Munger strongly believes in their portfolio of investment that they have in Berkshire Hathaway. For example Warren believes that Coca Cola company will sell a lot more beverages in the future and Charlie Munger believes in IBM because that company is adapting really well in the changing computing industry.

What will happen in the future?

Based on the company past result and the annual report of 2014. We would say buy more stocks of Berkshire Hathaway stocks A and B for the long term. If you are in for the short term profit then trade in Berkshire Hathaway CFDs here.

Check the video below and see what shareholders think and how they experience the shareholders meeting of Berkshire Hathaway.

With the recent development in Greece Euro situation many are asking this question: Will Greece stay in EU or not? In this article you will find our thoughts about the Greece situation and how we are thinking on to set up a trading plan for that.

On friday 24th of April Jeroen Dijselbloem said in the Greece Euro situation that there will be no funding for Greece until they have met requirements that’s been set by the Eu. Yesterday on the 27th April the prime minister of Greece Tsipras announced that the negotiation team has been reformed. Greece financial minister Varoufakis got replaced by Tsakalotos.

The markets reacted positive on those development in the Greece Euro case. We have to mention that the markets were already in a good mood because of the good earnings from companies that publicised their first quarter results.

Today the 28th of April 2015 the Greece prime minister Tsipras announced that if the bailout terms are not fair in Greece Eu situation, then the prime minister have to held a referendum.  This way the citizens of Greece can choose if they want to support the EU bail out deal or not. (sources : Financial Times)

What do we at 101trading.co.uk expect?

Its difficult to say of what to expect. In the Greece Euro case we think that both parties will strike some kind of a deal. We have noticed that Greece have changed their attitude a little bit towards the EU since the Greece election. According to the dutch news paper “de volkskrant” Tsipras is willing to break a few of his election promises. (source: volkskrant)

We believe that EU won’t let a Grexit happend because of the following reasons:

Now its up to EU to loose up a little bit and offer Greece a better deal.

How do we plan to make money?

On judgement day of Greece we will take a small position of cfds and options and create a strangle.

What causes the declining?

Well since Alibaba’s highest pike on the 14th of November, the company have been receiving critics from Chinese regulators on their e-commerce activities, forecasts that missed estimates and Alibaba is also currently facing slow growth in sales. And don’t forget the Chinese e-commerce market is growing that fast as many are expecting it.

What to do now?

Alibaba is still facing many challenges; they are still testing the waters of the international markets. Jack Ma announce a while back that Alibaba is going to focus a lot more on making money international then only on China. In the long term might succeed in this but in the short term its going to be difficult. Having Amazon as a competitor…

On the other hand Alibaba profits are still rising and sales are still good despite it didn’t met the expectations of many analysts. And Alibaba is making big investments in small tech us companies that could give Alibaba a good return on their investment. One the start up company that Alibaba have invested in is SnapChat.

We at TradeAndInvest101.com are thinking on holding Alibaba stocks with put options. We might go in the swing trade with CFD’s on Alibaba stocks. 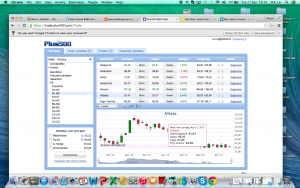 What is Fundamental analysis

A fundamental analysis is an analysis that is conducted by traders and investors to determine the value of a certain security (a investment object).

Investors and traders often use fundamental analysis to determine what the current real value is of a certain security and what the real value will be in the future. With this information the Pro’s decide what their plan will be for investing or trading.

What are the components of fundamental analysis?

There are many markets to trade or to invest in. Each market has their own basic fundamentals where the value of a certain security is based up on. In this article we are going to discus the three main markets where a lot of trading and investing is done. Those three markets are: the Stock market, Forex market and the commodities market.

When you are doing a Fundamental analysis you will have to check the policy of each central banks as they control the supply of each country currency supply, the economic state of a country. Those two factors have a major impact on the currencies. The central banks have a huge impact on the money supply as they have to the authority to put up more money in the market. The economic state of a country has a huge impact on the demand size for the country currency. With THESE INTEL you will know what you need to in order to increase your chance on trading profitable.

On the fundamental analysis of commodities you will check on the factors that have influence on the supply and the demand side of a certain commodity.

Let’s take crude oil for example (oil is a commodity). When you look at the supply of oil you will look at countries that produces oil. If those oil countries are announcing that they are going to produce more oil then you can expect a decrease in oil if the demand for oil stays the same. With the fundamental analysis you might discover what the factors are that have influences for the decision of increasing or decreasing oil production. With these information you will gain a better insights for trading oil profitable.

If you want to know more about fundamental analysis on commodities then read here: Fundamental Analysis on Commodities.

How to use fundamental Analysis?

The best way to use Fundamental Analyse is to combine it with the technical analysis.

Learned enough? Sign up for free and start trading now.

Learn how to make money by reading our trading articles