With the Greece Referendum all tension will be on today’s with the voting results. Will Greece say yes or no to the plans of the EU? On Friday some traders and investors are already selling their position or are buying new positions to benefit from the Greece current situation. Today in this blog we will discuss of what the possible consequences are when there is a Grexit.

When a Grexit has taken place, the first thing that the Greece government is going to do is taking measures that would prevent a bank run before installing the their own currency Drachma. As you already might have notice, the Greece citizen can only withdraw 60 euro a day at the moment.

Greece already has a bad economy and it will only get worse when there is a Grexit. Because there will be barely investment capital coming to Greece. It’s too risky for investors to invest in Greece. So Greece will struggle to get his economy growing.

However Greece can devalue their currency to boost their export. But the question will be will the profit of the export enough to compensate the loss on the import and to grow the Greece economy?

Grexit possible consequences on the EU

With import dropping in value not only companies get hurts badly in Greece but also companies that does business with Greece. Some are already facing problems already. One of the effects of the current capital control in Greece has caused is that Greece businesses aren’t allowed to pay its international suppliers.

Companies that were doing business with Greece companies could go bankrupt or they might have to downsize. As being traders we could make good profitable trades by going short on these companies. 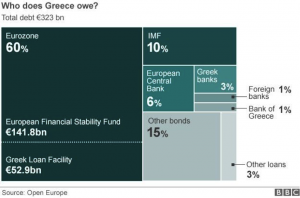 Let’s take a look to who Greece owes money too. As you can see in the figure above where it states 15% of Greece debt is through bonds. Banks, institutional funds, private investors and so on were properly buying these bonds.

When a Grexit has taken place, there is a possibility that Greece won’t pay any the interest to any of his debt holders for a while. They already have missed out the payment on the IMF. Banks and governments who were lending money to Greece will have to re-balance their budget because they don’t receive interest rate. This will lead into a tighter government spending and a tighter lending out money from the banks.

Then one more thing that we should not forget is immigration. If Greece has no more money then how can they care of their borders? And we should not forget the threat that the minister of defence of Greece made in May. Where he threaten to over flood Europe with economic refugees and thousands of Jihadist.

To put it simply blunt a Grexit will possible lead into a higher unemployment in Greece as well in Europe, companies can go bankrupt unless the governments bails them. All of this will probably bring Europe into a recession.

Grexit: possible consequences for the EURO

Grexit:  possible consequences on the Markets

What are the consequences on the markets? As we could see on last week Monday all markets were going down. And it recovers a bit during the week but that was because the markets were hoping that somehow a Grexit could be prevented.

When the Grexit has taken place the markets will keep on going down until the EU and ECB can convince the markets to calm down with a realistic plan and program (QE2) that ensures investors that Europe will be a strong union.

Day trading, make some money beside your full time job
Scroll to top
We use cookies to ensure that we give you the best experience on our website. If you continue to use this site we will assume that you are happy with it.Ok