Blog
You are here: Home1 / Blog2 / Experts3 / Future investments4 / Volkswagen shares: Time to buy or not…

What have happened to Volkswagen shares?

The American authorities caught Volkswagen cheating on the pollution test. Volkswagen had software that was able to sense when a vehicle was being tested for a pollution test. The software sensed that based on the position of the steering wheel, vehicle speed, the duration of the engine’s operation and barometric pressure. With this software Volkswagen diesel cars produce less pollution on the test while in the reality they produce more. Since the American Authorities have found that out the Volkswagen share prices have been dropping significantly. At the lowest point Volkswagen share had lost more then halve of its stock value.

Here are few reasons why you should consider investing in Volkswagen shares:

Reasons not to buy Volkswagen shares

Currently is impossible for me to find solid grounding reasons to start investing in Volkswagen shares for the long-term like I have with Starbucks. With Starbucks shares I have good grounding reason to invest it for the long-term. In lesser than a year my Starbucks shares almost doubled in value. I think at this moment the only way to get profit from Volkswagen shares is by trading it. At the moment of writing this blog the current value of Volkswagen share is 103.70 Euro. I think this could be a price pivot point where the share will drop in price again. 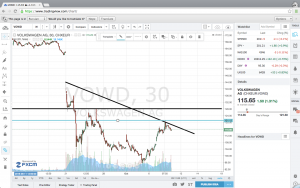 What is a broker?

CFD one of the greatest investment instrument
Scroll to top
We use cookies to ensure that we give you the best experience on our website. If you continue to use this site we will assume that you are happy with it.Ok